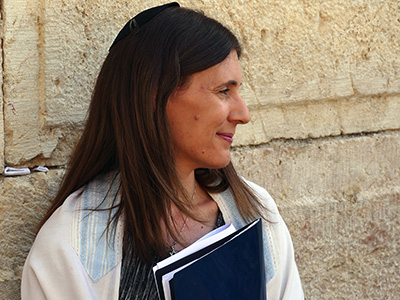 Rabbi Helayne Shalhevet
“Well, if we were looking for a congregation to join, I just found one you won’t believe!”
– Returning home from interview

Rabbi Helayne Shalhevet is a native Long Islander, born and raised in Wantagh. She received her Bachelor’s Degree from the University of Maryland College Park where she studied Jewish Studies and Women’s Studies. Following college, Rabbi Shalhevet spent a year living in Jerusalem where she studied at Machon Pardes, a co-ed modern Yeshiva.

Following that year Rabbi Shalhevet began her five years of study at the Reform Movement’s Rabbinical Seminary, Hebrew Union College. While at HUC she spent a second year living and learning in Israel, served a student pulpit in Altoona, Pennsylvania and interned at the Jewish Home and Hospital in Manhattan in addition to teaching in area congregations. Rabbi Shalhevet earned her Master’s Degree in Religious Education in addition to her Master’s Degree in Hebrew Literature and was ordained in 2009.

Following ordination, Rabbi Shalhevet created and coordinated an experiential family K-2 program at North Shore Synagogue in Syosset. She joined the Temple Beth Emeth family in 2010. Rabbi Shalhevet fondly remembers returning home after her interview and saying, “well, if we were looking for a congregation to join, I just found one you won’t believe!” It was the kind of congregation she knew she wanted her family to call home and one she treasures serving.

Rabbi Shalhevet lives in Plainview with her partner Rabbi Jaimee Shalhevet and their children Samuel, Gabrielle, and Benjamin.